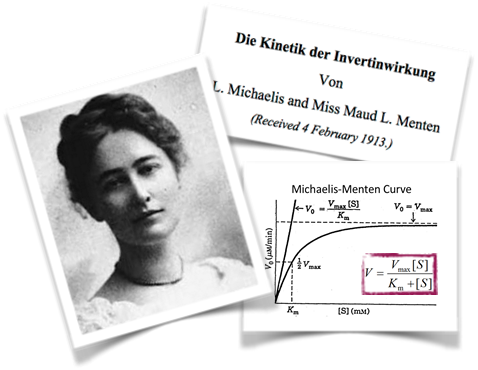 Shall we play a little game?
I would like to ask you to raise your hand if you have had the chance to go to school.

How many of you? Wow! That’s something!

Shall we go on playing? Ok.

Now, put your arm down if you haven’t earned a PhD.
I know, it is getting really hard, isn’t it? I also have my hand down.
Some of you still have a hand up in the air though!
Put your hand down if you have published less than seventy scientific papers.
Aha! I knew that this would be a game-over.

There was a person, a while ago, that did all of this and much, much more. This person is frequently named in biochemistry classes, because one of the key equations in biochemistry actually carries the same name. This person was described as extremely talented and dedicated, in the lab but also outside the lab. In fact, this amazing scientist managed to take part to an Arctic expedition and to speak fluently six languages (six!). As it were not enough, this person has been tributed a professorship and an annual lecture due to the great accomplishments reached as a scientist. And we are talking about someone that did all of this before 1960! I don’t know if you are impressed, but I definitely am.

But I feel like I am forgetting something… oh, yeah! That’s it. We are talking about a woman. And a very tiny one.
Don’t hide it. You are twice as astonished now.
Let me tell you something about her.

She was born in Ontario in 1879. She was curious and brilliant and it was not by chance that she became the first woman to gain a medical doctorate in Canada. She travelled a lot. She worked in many places in Canada, in the US and in Germany. Those who met her described her as very energetic in everything and very rigorous in her work. She made crucial discoveries related to blood pH, isoforms of haemoglobin, kidney function, chloride ions’ distribution in neural cells and bacterial toxins. She applied electrophoretic methods to separate proteins before Linus Pauling did. But she published her results during wartime, and she did not get any credit for it. The world had other worries back then. Nevertheless, she was brilliant and many contemporaries of hers acknowledged it. Above all, her best known accomplishment remains the formulation of an equation that is still used all over the world to describe enzyme activity.

Yeah, you know… those little chemical machines that perform every chemical reaction in our body without being asked to. She was indeed co-author of “Die Kinetik der Invertinwirkung” in which a mathematical, quantitative relationship is presented to describe how the rate with which an enzyme acts upon its substrate is dependent on the concentration of the substrate and on the relative affinity between the substrate and the enzyme itself.

Too complicated? Ok, let’s put it this way: she proposed an equation that tells us that the better an enzyme likes its substrate, the faster it will work on it. Let’s take an example. Let’s think of a bag filled with candies. Every type of candy you can think of is in that bag. Of course, I am sure that you will find in that bag one type of candies that you like far more than others. I am also sure that you will eat them first, and fast. If you had enough of your favourite candies in the bag you could keep on chewing them, on and on, and the speed with which you eat them is only limited by your own speed of chewing and swallowing. You could not eat faster than that. But this cannot last forever and eventually your favourite candies will be over and you would only have in the bag candies that you like less. You would probably keep on eating, but much slower, at the maximum speed possible given your degree of enjoyment for that particular candy. That’s exactly what enzymes do! This woman managed to describe this behaviour mathematically. She was smart, wasn’t she?

Unfortunately, despite her vital contribution to the work, and for unknown reasons, she was mentioned in the paper simply as “miss”, with disregard to her academic titles. She did not seem to take it bad, though. She never sought fame during her whole life as a scientist, and that was good, since very few honours were entitled to her while she was doing excellent research and taking care of one third of the courses of her department. She only became full professor one year before retirement. But she never complained and she kept doing what she loved with passion and transport. After her death some thoughtful people looked back to her amazing career and decided to entitle her a professorship and an annual lecture at the University of Pittsburgh. It is still hold every year, you know.

This has been the amazing life of minute Maud Menten, whose bright light keeps shining after more than one century since the publication of the Michaelis-Menten equation of enzyme kinetics. Not much has survived of her life outside the lab, but this is my tribute to her, and I hope to have brought her to you. We should learn from her dedication, her curiosity, her vision and her humility. One thing should be said though. She was very bad at driving her car.

Federica is currently doing her PhD at KTH and at the same time employed at Saromics Biostructures. She appreciates the small things life has to offer and most of all loves to play in the snow!
Posted in Posts.

Straight from the ESRs’ mouth!