First of all, protein crystallography is considered as an empirical science once there is a lot of time invested (I would say many years) in order to understand and characterized all the theory behind. However, there is no complete full knowledge about the field. There are proper methods to work with as well as some rules, namely, physio-chemical behaviors that can give to you some hints and keep you in the “right path” of the holy grail of protein crystallization. We have two different states due protein crystallization: nucleation where several disordered protein molecules attach one to another in order to form a nucleus of orderly-packed aggregate, and growth of the crystal which happens if the conditions are favorable, i.e., protein concentration, temperature, buffer composition and concentration, pH, size of the drop and precipitant condition.

Besides this, you should also take in account the techniques that you are using to crystallize your protein. The most known is the vapor diffusion where you, basically set up a drop by mixing your protein and crystallization solution. Afterwards, you placed it in a sealed well (of a proper plate) that contains a reservoir with your crystallization solution (precipitant). Because it is a close system (make sure you sealed well, it’s really important), protein and precipitant solutions can equilibrate with the reservoir which has precipitant solution in higher concentration. Initially, the drop contains relatively low precipitant and protein concentrations, but as the drop and reservoir equilibrate, the precipitant and protein concentrations increase in the drop by “vapor diffusion”. I think it’s easier if you take a look in the “phase diagram” that I draw (figure 1)! In any case, you should be aware that within vapor diffusion you can handle in two different ways, either by hanging or sitting drop. The principle is exactly the same but the way that you do it experimentally is different and that may be enough to change everything. Just take a look in figure 2 (that I also draw) and you will understand how it works. You can also check some crystal pictures of my decarboxylase and see how amazing crystals are (figure 3). 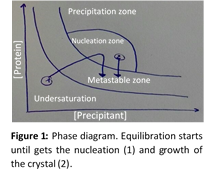 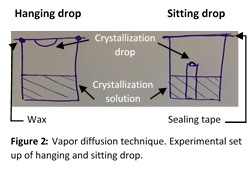 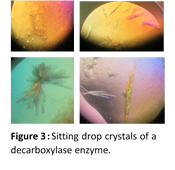 Now, I will make this a bit more challenging: I read somewhere that crystallography sometimes can be more art than science and I totally agree. Notice that everything regarding this “crystal world” demands outstanding observational capabilities, experience (that you will gain), (a lot of) persistence and most important, a good feeling. You should feel your crystal until the moment that you are fishing it and put it in the beam. Trust me: It’s really exciting when you get an email saying that there is a complete data set of your crystal or when you are in person at the synchrotron collecting your own data…and what does this mean? Well, a possible structure, that you will possible solve and possible refine and possible understand and afterwards, possible publish on protein data bank. How cool, right?

Then, you can be the one explaining how the protein looks like, what kind of mechanisms are involved regarding this protein, where is the active site, what is happening if you mutate your protein. By using protein X-ray crystallography, you can successfully create drugs, learn about metabolic pathways or find alternatives to produce drugs via enzymes. As you can see, there a lot of questions you can answer based on this technique!

Posted in Posts and tagged esr5.

Straight from the ESRs’ mouth!